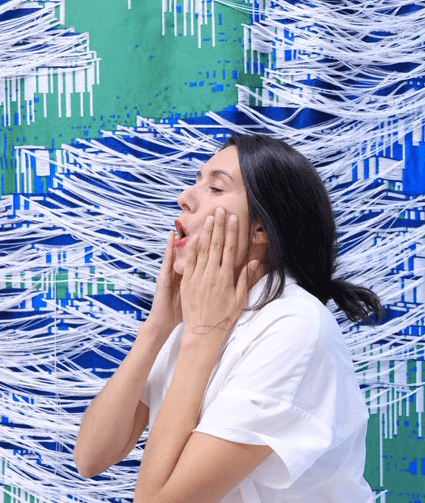 Constanza Camila Kramer Garfias is a Chilean Munich-based artist who has dedicated herself to textiles. The critical examination of textiles appears in the foreground as the medium of her work and is also a reflection of her cultural roots. In her works, for instance, in HYPERISM (2019), she reanimates the history and culture of her ancestors, the native Mapuche people living in Chile, to show the importance of their culture and their understanding of the Cosmos.

Through Constanza Camila Kramer Garfias's engagement with theories of postcolonialism and her bicultural background, she has developed artistic methods to deconstruct colonial structures in textiles. Her works are about taking textiles to their limits as a medium and subject, combining both artisanal and industrial techniques. With her current project Autobahn Evolution – Generation Overload (2022), she interweaves genetic research and computer science into her artistic practice.

This undertaking will be represented visually by crossing two textiles and their resulting offspring. With the use of artificial intelligence, the intersection of the two weaved artworks will be mathematically calculated. Through her works, she aims to transform the traditional perception of textiles in western societies and to find a new voice for textiles in the visual arts.

Constanza Camila Kramer Garfias holds a Master of Arts degree in Textiles from the Burg Giebichenstein University in Germany. In 2017 and 2018, she travelled to Japan to work with Japanese dyeing masters to learn about traditional and ancient techniques on how to create natural colors with plants. In her Munich studio, she grows her dye plants such as Indigo or Woad and continues to experiment with dyeing methods. Another part of her artistic practice involves her theoretical, structural, and historical engagement with looms.

Her approach is characterized by exhausting the algorithms of a loom and by deconstructing normative constructions of fabrics. Not only does she develop Jacquard fabrics with manufacturers in Como/ Italy, but also continues to play with new textile techniques such as tufting. Wanting to engage with philosophical theories in her artistic practice, she started studying Philosophy at the Ludwig-Maximilians-University in Munich.

With her Jacquard work HYPERISM (2019) she received one of four Honorable Mention Awards from the International KOGEI Award Japan 2021. Her work was exhibited internationally at the Arts and Design Museum of Toyama and the Takaoka Arts Museum in Japan, as well as in local shows at the Orangerie at the Englischer Garten in Munich, Chilean Conexíon Festival in Berlin, and soon at the Galerie Benjamin Eck in Munich.