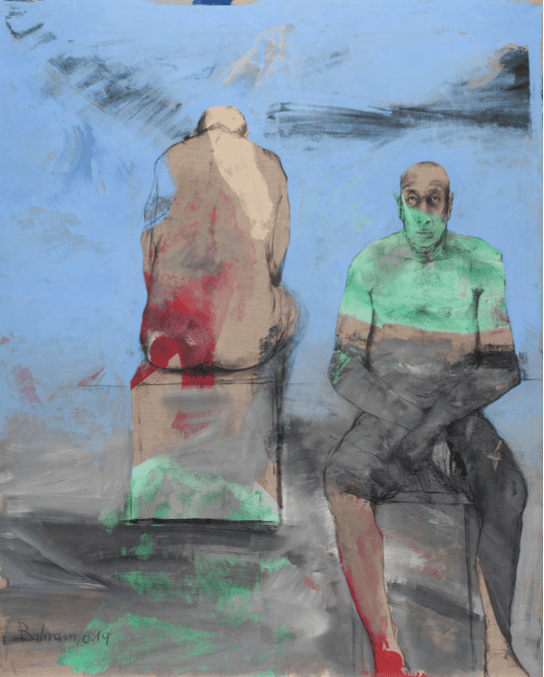 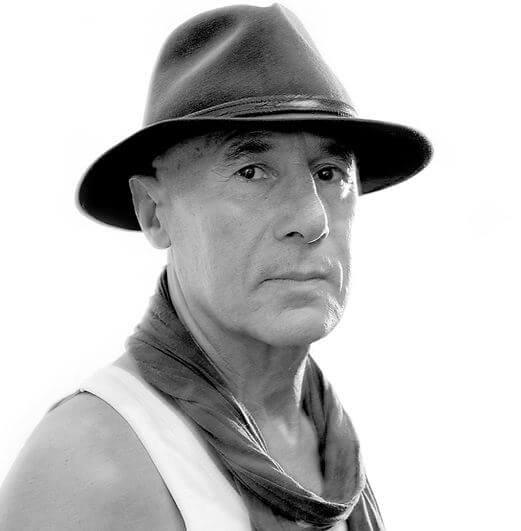 Bahram Hajou‘s path to painting was a win- ding one. Born in Deruna, northern Syria, in 1952, he went to Iraq in the 1970s and began to study Civil Engineering in Nau- perdan und Sulemanie in 1972. Just a year later he moved to Baghdad to study Art.

In 1974 he fled from the war via Prague to Berlin.
From 1976 onwards he studied in Müns- ter. Initially he enrolled for Archaeology at the University of Münster, then in 1977 he changed to the College of Education to study Sports and Art. In 1983 he comple- ted his studies and graduated. Following a brief period of teaching at the Gesamt- schule Ückendorf, a comprehensive school in Gelsenkirchen, he has devoted himself to fine arts since the early 1990s.

Bahram Hajou studied at the Münster de- partment of the renowned Kunstakademie Düsseldorf and after graduating became a master student of Professor Norbert Tade- usz. He had his first own exhibition in 1983 at the museum in Bochum.

Bahram Hajou has long been an internati- onally recognized artist, his paintings are in demand. He lives and works in Münster and working stays also take him to New York and Paris.

At the Hawerkamp cultural centre in Müns- ter, where more than 40 artists work, he has a large studio flooded with light. This is where the small, wiry man is to be found every day, wearing his trademark brown- felt Fedora hat in summer and winter alike. He seldom takes this hat off, keeping it on even in the studio. It makes him stand out and easy to spot in a crowd of people.

His paintings are highly acclaimed inter- nationally. In 2014 he was awarded the Henry Matisse Prize by the Château Musée Grimaldi in France. He became a star in the French media virtually overnight and even the large daily newspaper Le Monde dedicated a full-page report to him.

Bahram Hajou is regarded as one of the great figurative painters of our time. And there is hardly an artist in the Münsterland who has so many international contacts and whose paintings are exhibited in so many countries.

Hajou sees himself as a citizen of the world. He is at home in France, Jordan, Bahrain and Lebanon. He exhibits in Po- land, Hungary and the USA. The language of his paintings is understood all over the world and in every culture. Many of his paintings cause consternation, especially those in which Hajou deals with forms of
submission and violence or the relationship between men and women.

It is very obvious that the artist is exami- ning his own experiences in the paintings depicting relationships. The couples and groups shown seem to be in the middle of a psychotherapeutic family constellation. The psychological dimension of his pain- tings is the result of relentless self-analysis. Body postures and positions bear witness to the inability to talk to each other and to love each other. You can feel how arduous it is for those depicted to communicate with and understand each other. One of them gives the other the cold shoulder, bends over crushed or overwhelmed, sinks into loneliness and melancholy.

The truth expressed in these works of art is unadorned and unvarnished. The expres- sion immediately triggers a feeling. These paintings leave nobody cold. Whenever a man appears in his paintings, he bears the unmistakable features of his creator. As an artist, Bahram Hajou is like a seismograph;
he perceives tensions – whether they be private or political.

Since the mid 1980s Bahram Hajou has had more than 90 exhibitions in Germany and abroad. Locations include Dubai, Riy- adh, Damascus, Cracow, London, Vienna, Budapest, Puebla (Mexico), Paris, London, Antwerp, Graz and New York.
His works are on display in many muse- ums. Since 2012 five large-format paintings have been hanging in the Museum of Qa- tar. They deal with violence against women and as such are political works which take a stand. The Emir‘s wife chose and bought them after an exhibition, as if to indirectly express her attitude to the role of human rights in her own country.

In summer 2018 he worked for several months in the USA. In his studio in New York he painted more than 20 large-format works which mark the beginning of a new creative period. In winter Bahram Hajou is continuing his work in New York. A longer working stay in Paris and several exhibi- tions are planned for 2019.